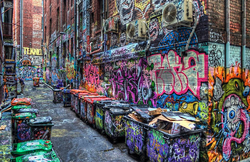 Why Moss Art and Why Not Graffiti?

Graffiti overall is toxic for the environment and emits fumes into the air that promotes global warming. Also, according to scientificamerican.com, “Modern-day, CFC-free aerosol sprays also emit volatile organic compounds (VOCs) that contribute to ground-level ozone levels, a key component of asthma-inducing smog.” Though the actual paint in the cans is not healthy for our environment, mostly the cleaning substances used to clean the paint off the walls are extremely harmful. As graffitiremoval.org states, “The potential for damaging environmental impacts is high when using and disposing of chemicals.” when talking about using and trashing the chemicals used to wash graffiti.

Another negative output of the aerosol cans is methanol. Although methanol is known to be biodegradable and does not have any direct detrimental impacts on the environment, the substance is not healthy for humans. Environmental protection agency declares, “Workers repeatedly exposed to methanol have experienced several adverse effects.  Effects range from headaches to sleep disorders and gastrointestinal problems to optic nerve damage.” The effects of methanol are still a highly controversial subject, yet evidence does point to how repeated access to this chemical will cause future health problems.

Not only is graffiti toxic to the environment, but also many question the morality of “tagging” areas in which one does not have legal right to coat in paint. Both sides are argued with some believing that the punishment should be lessened or even abolished, and others consider graffiti absolutely illegal and wrong. Some forms of graffiti can be gorgeous such as wall murals in otherwise dreary areas, intended to beautify the neighborhood. Other forms of graffiti consist of a scrawled name or a crudely drawn symbol or doodle that does not benefit the neighborhood as a whole. An estimated 12 billion per year is spent cleaning graffiti, and costs on average (in a more graffiti-covered area) about 1-3 tax dollars per person.


The moss graffiti that I intend to make uses natural ingredients such as buttermilk and actual moss. One paints the paint mixture on a site in contact with sun and will take about 4-6 weeks to grow. Daily watering is a must; and two times a day would be preferable for the moss to grow. For the first week or two, one only has to water every other day, alternating between watering and applying more of the paint mixture. After one no longer wants the moss art or graffiti, one can spray it with lime juice which will effectively kill the moss and allow one to scrape the moss off the area.